(Summary of the documentary. English). The association Zezen Beltz premiered a 75 minute documentary in Basque on reined bull running in Azpeitia in 2011, called ‘The rope is unbroken’ (‘Soka ez da eten’). It was very successful. Now, in 2013, a summarized version of that documentary has been made in catalan, spanish, english and french, each 15 minutes long. Documentary euskara (75′).

Azpeitia is located in the centre of Gipuzkoa province in the Basque Country, with a population of 14,000 inhabitants and has been a big fan of bulls for a very long time.

The oldest news found in the Azpeitia Municipal Archive regarding bulls dates almost 500 years ago; 1518 to be precise. The Castile monarchs made a visit to Gipuzkoa and to celebrate the event, they hired a bull from Mr Pedro Ruiz de Agirre, for the sum of five ducats. The Azpeitiarras were the ones to play with the bull.

There is more information about bulls in the streets of Azpeitia five centuries ago, for example, 1522, 1533, etc.

They would probably have been heifers, oxen or half-cast bulls forming part of the cattle. Furthermore, they would frequently have been from the same town. The archives of that period made it clear that they almost always played with the bulls in fenced off areas in Azpeitia.

Nevertheless, a decision taken by the municipal authorities in 1567 indicate there was a special change, i.e. the reined bull-running history began.

Thus, the San Sebastian festivities or carnivals in Azpeitia would not be the same as without this modality.

Thus the “reined bull-running” —‘sokamuturra’, in Basque —, has strong roots in Azpeitia, which the people are unwilling to lose. Here are four reasons:

– In 1971 the town council announced the sokamuturra would be removed from Mardi Gras, and the people went to the Deputy Mayor’s house to ‘demand his head on a plate’.

– In 2008 when the Basque Government wanted to toughen the safety regulations there was a large demonstration in Azpeitia.

– Reined bull-running has never been suspended even when there has been heavy snowfall. The images are from Mardi Gras morning in 1996. There was a tremendous ambience during the pasacalle (folk street dance) prior to the event.

The work that goes on in the background

The reined bull-running takes place particularly in the festivities of San Sebastian and carnivals during many hours. On 20th January San Sebastian’s day for example, the bull is in the street for four hours. During the 72 hours of carnival, there is sokamuturra during 14, i.e. in the morning, midday, afternoon and evening.

The toro embolado and tied, apart from lasting many hours it goes round different squares and streets in Azpeitia.

There is a lot of hardwork behind the sokamuturra. There is the sacrifice of the cattle farmers and rope boys the ‘sokamutilak’, so everything turns out right and tradition follows its course.

The cattle farmers say it was possible to live from cattle in an era long past. However, not today, yet they continue going to Azpeitia and other places.

Fernando Zubiaurre (Gorixo cattle farm, Mutriku, Gipuzkoa): “It’s a very large expense. You can’t live with that alone, you have to work in something else, but we’re bull enthusiasts”.

Andoni Mugerza (Arno cattle farm, Mutriku): “If you’ve got cattle, you’ve got to work all year, you have to attend the cattle at all times; you can’t fail”.

Reined bull-running also requires the work of the rope boys or  sokamutilak. They also make a sacrifice.

Luis Angel Etxeberria (ex-rope boy): “I’ve had to give up a lot festive events. Being a sokamutila is physically very hard. It’s an explosive exercise and you get very tired”.

To become a rope boy you need enthusiasm and a spirit of sacrifice as the sokamutil Mikel Odriozola states.

There was a time when the municipal police brought it out pulling on the rope. In 1887, the police carried out an act of disobedience and had to pay a five peseta fine. In 1899 two youngsters from Azpeitia cut the rope, the town council reported them and they were taken to court.

After the municipal police refused, the task of carrying the rope fell to the workers of the town slaughterhouse. The rope boys or sokamutilak, began their cycle in 1925; the photo is from that year.

The so-called sokamutilak have numerous anecdotes. For example: one decided to retire after 16 years performing this task, and 5 minutes before the reined bull-running finished on his last day he was gored and spent 9 days in hospital.

Azpeitia is the toughest one

According to data, there are over a thousand events of reined bull-running in the Basque Country or similar per year. That is a lot. Moreover, the cattle farmers are certain the toughest place is Azpeitia.

Why? There are several factors:

One: During three and a half hours in an afternoon, around 6 bulls run round the streets, half an hour each. In other towns the average is 15 minutes and the event length is shorter.

Two: There are a lot of enthusiasts in Azpeitia, and this also affects the cattle.

Three: The rope is very heavy. It weighed 92 kilos on a rainy day. The bull has to take it up and down the streets.

Four: The rope is tied to a ring in a wall. When the rope reaches its limit, and the bull is moving very fast, there is a risk of it receiving a big impact, which the rope boys try to prevent.

Consequently, the cattle farmers have reached the conclusion that the bulls released in the streets of Azpeitia must be large and if they are experienced better. As to the weight, the legal limit is 350 kilos.

The rope is one of the most noteworthy characteristics of the Azpeitia sokamuturra. The rope boys prepare it themselves.

Their task is not to make the rope but join the two strings received, fuse them together and leave it ready for the even. In the end the rope is 55 metres long.

Thanks to the measures taken, there has been a new rope (which is a safe material) per event since 2002. The last time it broke was in 2002. It also broke in 1990, the moment is captured in this photo.

If you take into account there have been bulls in Azpeitia since 1518, one cannot begin to count the number of bulls that have been running in its streets with or without the rope.

Perhaps, the most legendary of all was: Botijo. This is the one. The images are from 1976. He was brought to Azpeitia for the first time in 1971 and was there for 13 successive years. It is said, Botijo already knew where the rope boys were, that he knew all the street corners and never collided with any limits, etc.

The sokamuturra started from Etxe Zuri stable, which was also special. The event started from there during many years. However, the bull has left from a lorry in Calle Mayor since 1980.

The bulls are brought to Azpeitia in a lorry on the very day of the sokamuturra. You can see in these images how the cattle from Arno cattle farm in Mutriku are being loaded. From there to Azpeitia there are approximately 25 kilometres.

There have been special moments immortalized by amateur photographers. There has been a photographic competition of the sokamuturra since 1980. The winner of the first edition was Luis Rey, with this photo called Hemp Rope.

To provide the sokamuturra with greater social support and organize more events apart from the reined bull-running, the rope boys, some enthusiasts and the livestock breeders created an association in 2008 called Zezen Beltz (Black Bull).

Among other events they usually organize bull-running for youngsters (between 10 and 17 years old using young heifers), ponies, weekend association, sokamuturra in the festivities of some districts, competition of recortadores (young men who mock the bull using only their bodies and acrobatics) , etc.
…………….

The rope is unbroken

The Azpeitia sokamuturra has a long history. There is a 75 year interval between these two photos; however, the characteristics are the same: the place, bull, rope, people, etc. This is just a snippet of these last 500 years.

The rope is unbroken. 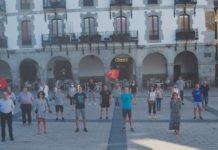 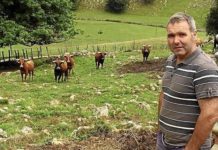 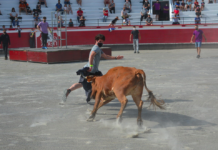